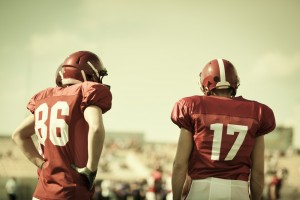 There is some very exciting news to share about a recent study out of University of Cincinnati regarding vision therapy/training and head injury and concussion rates among football players. Given the amount of understandable concern over concussion rates in athletes of all ages in many sports, I wanted to share this information.

Researchers at University of Cincinnati are reporting, “a statistically significant lower rate of concussion for players in UC’s program who received vision training.”

This is important. They are finding a statistically lower number of concussions in players who went through a course of vision training (therapy) during their training phase and PRIOR to the actual football game season.

Joe Clark, PhD, professor at UC in the UC Department of Neurology and Rehabilitation Medicine, along with his colleagues, incorporated vision training into the preseason football camp schedule of all UC football team members in 2010, giving them four seasons (2010–2013) to compare to four previous seasons (2006–2009) without vision training.

Per the UC Health News report, “When data on concussion incidence were evaluated, a statistically significant lower rate of concussion was noted in players who received vision training (1.4 concussions per 100 game exposures) compared with players who did not receive the training (9.2 concussions per 100 game exposures). The decrease in injury frequency in competitive seasons with vision training was also associated with a concomitant decrease in missed playing time. (All team members for each season used the same helmet models from the same two manufacturers.) In other words, according to Clark, the average annual concussion rate fell by over 80 percent from pre-vision training years (2006 to 2009) to post-vision training years (2010 to 2013).”

Of course, sports vision training (therapy) isn’t new nor are the benefits. Developmental optometrists have been working with athletes for many years with fantastic and lasting results. But this new study helps us all understand the benefits beyond fine-tuning athletic performance—now we have statistics pointing to a desired health benefit: the athlete’s ability to avoid devastating head trauma.

Here is a link to the UC Health News Report for the full story.